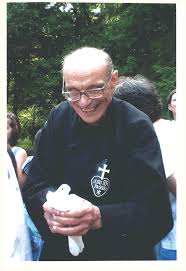 Passionist Fr. John Baptist Pesce, 93, of Holy Family Monastery and Retreat Center in West Hartford, CT, was the inaugural guest of Reasonably Catholic: Keeping the Faith when the program launched in 2012. Known to his flock for his urgent, progressive-minded wisdom, he has been an occasional guest since then. Today, he takes up five subjects: parish-shopping; Pope Francis’ end-of-the-year message; Father John’s own Christmas homily; obedience; and finally, our responsibilities over the next four years. Father John offers Mass at the monastery Monday through Saturday at 7 a.m.

Here is a link to Pope Francis’ end-of-the-year message:

And here is the text of Fr. John’s Christmas homily:

He came.
He entered space and time and suffering.
He came, like a lover.
Love seeks first of all and above all
Intimacy, presence, togetherness.
Not happiness.
“Better unhappy with her than happy without her” – that is the word of a lover.
He came.
That is the salient fact, the towering truth,
That alone keeps us from putting a bullet through our heads.
He came.
Job is satisfied even though the God who came gave him absolutely no answers at all to his thousand tortured questions.
He did the most important thing.
He gave the most important gift: himself.
But it is a lover’s gift.
Which means it can be … tragically many times it is, refused!
But the fact of history is he came.
Out of our disconcerting tears, our restless waiting, our impenetrable darkness, out of our agonized aloneness, out of our inescapable confusion, our weeping and wondering, our of our cry, “My God, My God, why have you forsaken me?”
He came all the way, right into that cry!

Except for sin, he knew the human condition (you name it) not as an abstraction or a philosophical problem but in the reality that it is in all its dimensions.
The Word became flesh!  “Flesh” the Greek word sarx to counter any suggestion of make believe, appearance or semblance.
Not a clever piece of divine play-acting. Here the familiar words apply: what you see is what you get, the reality in the flesh is the flesh.

The Son of God, becoming flesh, summons, invites, incites, challenges us to a revolution of tenderness, as Pope Francis expresses it.

He came to bring about a nonviolent revolution of love. Instead of competition, he seeks to have us cooperate, rather than conduct ourselves as rivals, as one above the other, he motivates us to contribute to the common good.
And betterment of all.
He came, as he stated his mission, that we might have life and have it more abundantly…that more abundant life – not a matter of quantity! – but over and above the natural – that which belongs to him as God he shares with us by grace.

I live now, not I, but Christ lives in me!

Imagine that! No, don’t imagine. Accpt it as the reality, the God-given gift that it is. Christ in you, the hope of glory. He came!
Jesus brings about this marvelous exchange which the Church thanks God for in her prayers during these days.

O marvelous exchange!
The Creator of the human race has become man,
born of a virgin.
We have been made sharers in the divinity of Christ
who humbled himself to share in our humanity.

That sums it up admirably. All the rest is commentary! As when Paul the apostle writes, I live now not I,
But Christ lives in me! No euphemism. No exaggeration. Christ lives in me!
The Lord Jesus continues his life – he is in the world, right now.
At this moment … as close to you and more intimate to you than you are to yourself! Or than I am to myself! This is what we celebrate!

There is an old saying based on the mystery we are celebrating. “Through his union with one of us, the Word has taken up his abode in all of us!”
Pope Francis proclaims this truth by quoting his predecessor Pope Benedict.
Listen carefully to the words of Pope Francis: “I never tire of repeating those words of Benedict XVI which take us to the very heart of the Gospel:  ‘Being a Christian is never the result of an ethical choice or a lofty idea, but the encounter with an event, a person, who gives life a new horizon and a decisive direction.’”

This is precisely what the Son of God become the Son of Mary does today in every child born into the world.

There was a 17th-century priest, poet and mystic named Angelus Silesius. He was so taken up with the meaning of the mystery of God become flesh that he preached to the common, ordinary people of his day: “Should Christ be born ten thousand times anew, desair, O Man, despair, O woman, unless he’s born in you!” With the experience of Jesus being born in him and with the Spirit-boldness of someone who had experienced God in his life, Angelus even dared to preach, “I am to be another Mary and bring Christ to the world.”

What prevents us from claiming that call from God to do the same? Is that not the mission of the Church? And are we not the Church? Whom we honor as the Sacrament of Christ, the visible sign of the invisible Lord?

Nor is that the only such hard-to-believe witness we have to such a stunning reality. We have among our ancestors in the faith a theologian and founder of religious order of priests in the Church, Saint John Eudes. The society of priests which he established are in charge of St. Michael’s College in Winooski, Vermont. Some of you may even be graduates of that institution or know those who have graduated from there. He preached the true Catholic faith with these words: “It may be truly said that a Christian who is alive with the life of Christ and united to him as a member of his body completes and accomplishes in every action he performs in the spirit of Jesus, the same action which Jesus Christ performed during his lifetime on earth. For the Christian life is nothing other than the prolongation and the completion of the life of Christ in every one of us!”

Because, through no fault of your own, you may never have had the mystery we celebrate – the Word made flesh – put before you in this stark, and perhaps disturbing fashion – does not make it any less true and applicable to you, to all of us who belong to Christ and adore him as the Word become flesh.

No, He came and revolutionized our lives to make them the continuation and the prolongation of his own. Or what could he have meant when he told us, “As long as you did it to one of these the least of my brothers or sisters you did it to me”?

But the unassailable truth is that God has one desire, one single purpose – the one-track mind, or the single heartbeat, the “blood pulse” of the divine heart whose single intent is to enrich, stun, amaze, discombobulate us with nothing less than the gift of divine selfhood … beyond expression, imagination or conception! We say precisely, ineffable!

You may well shake your head and be thinking, saying to yourself, “I don’t understand! I don’t’ understand!” Indeed! How proper! And if you did understand, where would the quality of transcendent surprise be? What kind of God would that be? A God measured according to our created, limited dimensions? That would not be anything like the God revealed in the Word made flesh in Jesus Christ revealed in the Gospels!

We have only the Word of God. Only the Word of God. Take that easily, slowly. The Word of God, living and effective (Heb 412), not any kind of verbal articulation, which passes us by, like a puff of breath, but the Son of God in the flesh, who kept that Word most manifestive of His love and most  difficult to keep. “And on the third day I will rise again and be with you until the end of the age.” The Word of God who gives us the assurance that rules out any reason to envy, resent, or consider ourselves at a disadvantage to the contemporaries of Christ, but make us His contemporaries, “Blessed are those who have not seen and have believed!” (Jn 20:29)

Come, let us adore him, Christ the Lord! Let us succumb to this mystery ineffable of the Word made flesh, the God who on the celebration of His birth as human makes the fit of Himself as one of us to each of us that we might continue His divine mission of glory to God in the highest and on earth peace to all of good will!