On the Nov. 6 Election Day episode of Reasonably Catholic, we hear from two experts—John Finn, Wesleyan professor of government, and Mark Silk, director of Trinity College’s Center for Religion in Public Life—about the Catholic bishops’ objections to the contraception mandate in the Affordable Health Care Act.

“The bishops are on the wrong side of the argument here” 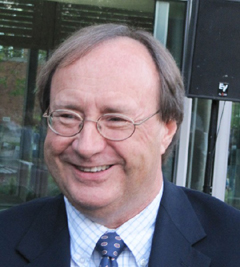 Listen to more from my interview with Prof. Finn about the undecided voter:

Excerpts from the interview with Prof. Finn:

• On Catholic voting trends:
“It’s my sense that, over the years, and progressively so with each election, Catholics vote less and less distinctly as a bloc. Now maybe there’s something about the mandate, and the bishops’ fortnight that will galvanize Catholics to vote more as a single demographic unit, but I’m inclined to think not. I would be very surprised if we see any real substantial change in how Catholics have voted in past elections.”

• On freedom of religion:
“There are a lot of basic misconceptions and myths going on about what freedom of religion means, about what the First Amendment means, about who has the power to define it, and while I think the bishops are ultimately mistaken as a matter of constitutional law, the position they hold, that the mandate directly interferes with their free exercise rights, is not a crazy one. I think t’s mistaken but it’s far from crazy. And in any event, it may be the one that some future court ends up adopting.”

• On the U.S. bishops’ challenge to the Affordable Health Care Act:
“For the last 10 or 20 years or so, it seems reasonably clear as a matter of constitutional law, distinct from constitutional principle, that the bishops are on the wrong side of the argument here. There’s not a whole lot of support in the case law for a position that says that an otherwise valid, neutral law which doesn’t have the intent or purpose of picking on religion in particular should nevertheless not be applied because it offends your religious faith. … The rule is clear that there isn’t much room for an exemption for the Catholic Church just because they think it violates their faith….This would make every religion a law unto itself.”

• On whether compromise on the mandate is possible:
“There have already been several articles in Commonweal , for example, and other places, to suggest there are perfectly reasonable accommodations the Church could make within its own theology that would allow it to live with some form of the mandate. “

• On the bishops “Fortnight for Freedom” campaign:
“I’m wondering why we had the fortnight on the mandate but we haven’t had, in my life, anyway, that I can recall, a fortnight dedicated to the Church’s larger proposition that health care is a fundamental right for everyone, or that we ought to have a fortnight against poverty.

Prof. Mark Silk, director of the Leonard Greenberg Center for Religion and Public Life at Trinity College, talking about public reaction to the U.S. Conference of Catholic Bishops’ objections to the Obama administration’s Affordable Health Care Act: “Most Americans don’t buy this as a threat to freedom of religion.”

Listen to Prof. Silk on polling:

Excerpts from the interview with Prof. Silk:

• On the bishops’ giving Catholics more reason to leave the Church:
“To what extent are they prepared or even eager for a smaller, more obedient church, without all these annoying people running around saying, ‘baloney’?”

• On prospects for an end to the abortion debate:
“I’d even say this about some of the pro-choice folks – this is an issue where a lot of people don’t want to find common ground. There have been efforts to try to go there. There’s a certain amount of industry – industry in the sense of social movement organizations that raise money – that, really, would go out of business if this issue were solved. … so I don’t’ see much likelihood of this disappearing.”

• On why the bishops are so focused on birth control:
“Personally, I think there is a kind of shell-shocked quality to the Church that helps explain a lot of the behavior: as a result of the abuse scandal. [It happened] not just in Boston, not just in New England, not just in the United States, but all over the world and in the Vatican and …I think at some level, the sheer unhappiness and rage of leaders of the greatest religious institution in the history of the universe at having to be regarded as a species of lower order of being, and morally corrupt and so on … I think it really sort of – it kind of drove them nuts.…So in the large scale of things, the turn to the right and the slightly out of control quality of the bishops, I just have to believe it has something to do with the shock of the scandals.”

• On the Catholic vote:
“Catholics are the most representative religious body of any religious group. That is, if you take all the Catholics and you tell me how they vote in a given election, I could tell you who won the election.”

Link to NYT Thomas Friedman column: “Why I am pro-life”